The contemporary composer Caroline Shaw lives on the east coast of the USA, in New York – a faraway shore from Topsham in Devon but as was mentioned in the previous blog post the trading connections between Devon and America are historically longstanding.  This map shows the trading links – in particular the route to Newfoundland with its fishing riches. 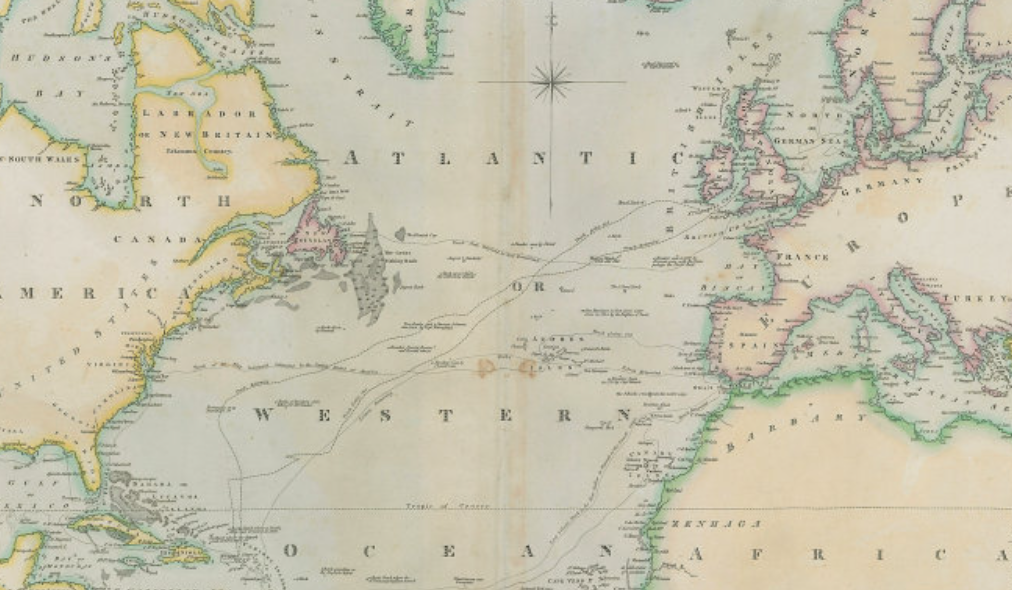 As we will see, the connections across the sea are greater than a map can show.

Shaw was born in North Carolina, studied Suzuki violin with her mother and subsequently developed as much of an interest in singing as violin playing, although she has said that she has a particularly close affinity with the string quartet as she fell in love with the genre when she formed a quartet with friends at school.  She has very diverse musical interests and has collaborated with musicians in a number of different genres.  She is not easily pigeonholed.

One of the characteristics of Shaw’s writing is how she embraces older musical forms and weaves the old into the new, but without it being obvious or derivative.  She uses it as a spark for her musical imagination.  In this sense she is writing in a great tradition of course, along with many other illustrious composers.

Entr’acte, which we are playing, is a response to the minuet and trio of Haydn’s Op 77 No 2 quartet.  In programming Entr’acte with chamber music by Dowland and Locke written long before Haydn established the string quartet as a genre to be reckoned with, it feels right that Haydn’s significance is implicitly acknowledged, especially as we then go on to play a work (Nielsen’s second quartet) that is so confident and unabashed in the genre.

There is one passage in particular that references Haydn.  We play it here:

The passage (very brief) in the Haydn that she has used is between 1:08 to 1:13 in this recording.

You have no doubt noticed that we don’t always play actual notes but move the bow across the string making a rather breathy sound.  Shaw has said that, along with her love of singing (and even her instrumental works have a vocal quality to them) she has a particular interest in breath.  “I can say that in the last few years, I have become much more attuned to my love of hearing breath.  Recently I was recording a project and the audio engineer had taken out a lot of the breath sounds of the voice of the singer, and that’s actually what I love.”

Gaps and silence are built into Entr’acte, contrasting with music often of wild energy.  There’s something about this verse by the great American poet Emily Dickinson with its hyphen breaks and mention of waves and breath that reflects the lulls and energy in Shaw’s music – music that is hugely rewarding to play as well as emotionally involving for both listener and player.

(From ‘Three times – we parted’ by Emily Dickinson)

Coming up: Nielsen’s at the helm – watch out!