My First and Last Love

Music was my first love

And it will be my last.

Music of the future

And music of the past.

To live without my music

Would be impossible to do.

In this world of troubles,

My music pulls me through.

I was rather keen on this song when it came out and still retain a curious fondness for it.   I related to its obsessive, repeated message and found it musically and structurally interesting – well, more interesting than some.   Apart from its obvious message, the lyrics also summarise the lives of many composers and artists who have produced extraordinary and elevating works of art, often in the midst of suffering and difficulty.  Beethoven, Schubert, Vermeer, Van Gogh, Proust, Joyce – the list goes on and on.

The lyrics also convey something of the compulsion musicians have to make music, and touch on the reason why people act on their wish to experience live music and go as far as venturing out to attend concerts – when it is safe to do so!

Since this quartet’s live public music making was terminated, albeit temporarily, along with music making the world over as a result of lockdown, we have enjoyed putting together some videos to connect with those who have been drawn to our music making, and to show that we are still up for it.   Obviously we are aware that the videos may reach an audience but it is a very different sort of chemistry from playing live, interacting with each other on the spur of the moment, and with an audience nearby very much involved in the experience and responding very personally to what the music conveys.

It means a huge amount to us as musicians that you the audience are there, and not just for financial reasons!  ‘This gift (of music) will not be like the alms passed on to the beggar; it will be the sharing of a man’s every possession with his friend.’ (Hindemith)  To share our music making live is an act of sharing which goes both ways.  The way an audience perceives the music and the music making is incredibly important.  In a way, music only properly exists and comes into being in this context.

There is no doubting, too, that music can affect us and change us deeply, and that music, like writing and the visual arts too, also has a way of shedding light on our contemporary situation, politically, socially, emotionally, even if some of the music may have been written a couple of centuries ago.

For these reasons it is a huge loss not to be able to make live music and have this communal experience of reflection and inspiration.   In fact it seems to present a huge question: without the interaction of performer and audience, what is the meaning of music?  It would be interesting to hear your thoughts…

Those who attended Schubert’s small chamber concerts  (‘Schubertiades’) obviously had no concerns at all about social distancing: 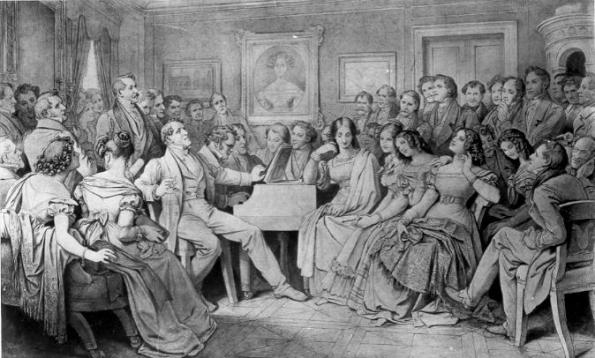 This drawing shows how many people there actually were crowded together at these performances. (Maybe there is a little artistic license. Von Schwind was a close friend of Schubert and would have wanted to show him in the very best light.) The scene reminds me ever so slightly of the concerts that we have done in the round, where the communal experience and role of music feels particularly heightened.

‘It is a fallacy that the artist invents for himself alone. No man lives or moves or could do so, even if he wanted to, for himself alone. The actual process of artistic invention, whether it be by voice, verse, or brush, presupposes an audience.’ Vaughan Williams