It was sad to hear of the recent death of Nicholas Parsons, the genial presenter of Radio 4’s popular comedy programme Just a Minute.

“Without hesitation, repetition or deviation” has become a catchphrase used in common parlance.  It is something that any musician who presumes to stand up and talk about the music about to be played would be wise to bear in mind.  As audiences may have noted, I am still very much a learner in this respect. I’d only last a few seconds on that programme.

Turning the rules upside down to make hesitation, repetition and deviation permissible in a musical context, some thoughts have struck me in relation to the works that we are playing in our current concert series.

I suppose the most obvious musical manifestation of hesitation is the pause, indicated by the composer in the printed music by what could be described as a dot with a sideways bracket above it, looking a bit like an all-knowing eye and eyebrow.  There isn’t a single pause in Mozart K 421. There are several in the Webern Bagatelles – momentary lulls in the intense abundance of textures and expressions. There are a few more in Beethoven’s Op 59 No 1. He was an inveterate pause man, even more than your most avid dog or cat lover.  His most famous work (arguably), his 5th symphony, has two pauses in close succession at the beginning of the piece.  Sometimes the pause is used like this for dramatic effect. At other times it marks an important place in the structure of the music where it is time to stop and gather or to stop and allow thought for… possibilities.

“What do you call that?” asked a rather bemused and slightly indignant lady who came up to me in the interval of one of our recent concerts.  Perhaps I was rather quick in assuming that she was referring to the Webern which we had just played, when it could easily have been that she was reacting to the sight of me in front of her.

The question as to whether the Webern is music at all is a good one.  It is such a different sound world to Mozart’s or Beethoven’s.

One of the huge differences between the Webern and both the Mozart and Beethoven is that there is very little clear repetition to hang on to in the Webern.  Repetition reassures the listener as well as providing key moments in the narrative structure of the music.  Paradoxically, Webern attended to structural aspects of composition with immaculate detail and he was obsessively fascinated by the natural world. 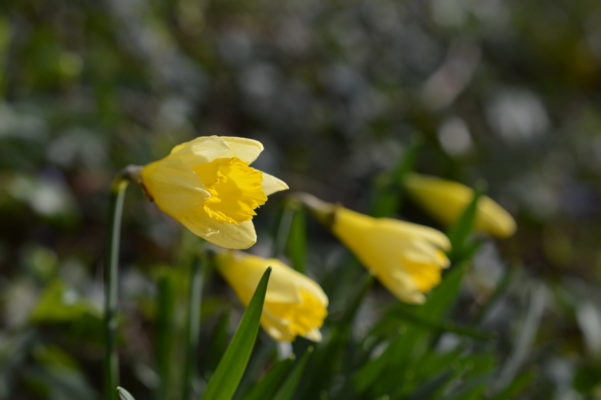 I came across this little group of daffodils in a hedgerow the other day.  I was struck by the courage of their blossoming at such a time of stormy assault by the elements.  They seem to contain a sense of spring just around the corner, confirming the repetitive cycle of the seasons.  Even the identical appearance of the flower heads demonstrates a repetitiveness that exists despite the seemingly random forces in the natural world.  A couple of days later I noticed that all the flowerheads were facing a different direction. Repetition can withstand quite considerable reinterpretation and variation.  Mozart demonstrates this superbly in the last movement of K. 421 where the main theme is repeated (often hidden in the texture of the music) and each repetition/variation is given its own character and life.

I refer to the honourable lady quoted above (to misquote a parliamentary statement), who clearly thought that Webern deviated completely away from an established understanding of what music was.  It is clear from contemporary reports that exactly the same was said of certain works by Beethoven when they first appeared.

I have spoken in a previous blog about the benefits of deviation of the musical kind.  The way composers deviate sparks interest and debate, for sure, to say the very least, which is the way it has to be as I’ve already taken up well over a minute of your time, if indeed you are still with me!

We do love chatting with our audiences in the interval and after the concert about the music and how people have reacted to what they have heard (and seen!).  If you can be there too, do come and chat to us. Do comment too on our blog posts, if you can make the system work… You may even get a reply.