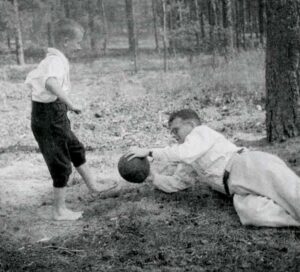 Mozart enjoyed a game of skittles, and Shostakovich loved football to the extent that he qualified as a referee.  He is seen here playing football with his son Maxim.  He supported Leningrad Zenit (now Zenit St Petersburg), frequently going out of his way to attend their matches.  According to Maxim Gorky ‘he was a rabid fan. He comported himself like a little boy, leapt up, screamed and gesticulated’ at matches.  Generally thought to be introverted and depressive, it is good to hear that Shostakovich found a way of releasing tensions, even if his interest in football is also inextricably linked with the state approval of the game as being beneficial for society.  As ever with Shostakovich, it is never a simple story.

I think it is undeniable that he translates some of the energy and fun of football into his music at times.  This is arguably evident in the 3rd string quartet’s first movement, but even more overt in this piece, ‘Football’ from ‘Russian River’ Op 66.

Without doubt there is a parallel in his music with the extremes of euphoria and despondency that players and fans feel after an important match. 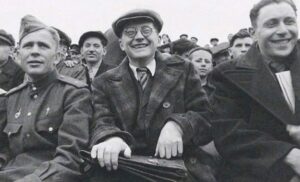 Shostakovich at a football match

I don’t know if Shostakovich played tennis.  He may well have been persuaded to play a set or two with his friend Benjamin Britten on the grass court at Britten’s Red House home when he visited.  Britten was a very keen tennis player, and it seems that he was rather intimidating on the court, as he could be when making music with others. 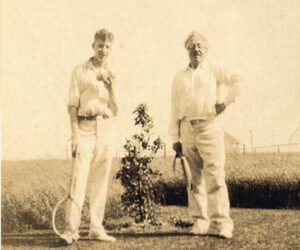 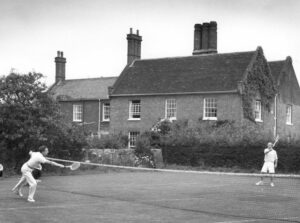 Britten (left) on the court at The Red House, his home in Aldeburgh.

My violin teacher, Colin Sauer (first violin of the Dartington String Quartet, renowned for their performances of Shostakovich and Britten quartets, amongst others), was a superlative violinist as well as an extremely gifted sportsman – tennis in particular.  The war intervened just as he was heading for Junior Wimbledon – he was being coached by Dan Maskell, who later became the strawberries-and-cream-mouthful voice of Wimbledon, with his trade mark “O, I say!” when a player’s shot impressed him.  Colin would have given Britten some difficulties on court, for sure. 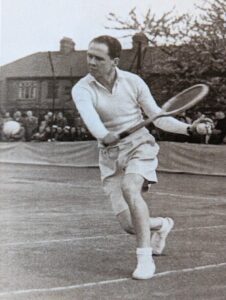 This picture shows how close, in a way, the tennis racquet is to a violin bow – it’s spring and tension, and how it is wielded creatively for its impact with the ball.  There is artistry in both.  There will be more on this subject in the next blog.

Colin was the inspirational conductor of a youth orchestra in Devon in the 1970s.  Along with his excellent musical tutelage, his anecdotes during rehearsals were legendary.  I remember him recounting a first hand incident when Toscanini implored the musicians he was conducting to ‘”Play louder….louder…. LOUDER!!”.  The stories were certainly a helpful pause from his exacting and inspirational musical demands.  I’m sure he was aware of the benefits of some light relief during rehearsals although there’s no doubt that he loved to hold court too.

The orchestra residential courses always had a table tennis competition built into the timetable.  The winner faced the ultimate challenge of playing Colin in an entertaining ‘demonstration’ match that as far as I’m aware always resulted in a slaughtering by Colin.

Perhaps it is not surprising that I was completely obsessed with tennis in my early teens.  I used to fantasise about Ilie Nastase, Jimmy Connors or Chris Evert driving by on their way down to holiday in Cornwall (on their own, not all together), spotting me practising on court and offering to give me a game.  It never happened.  They drove on by, the heartless people.

Fortunately for me, when Colin and his family came to visit my family home on a sunny summer day I persuaded him to have a ‘knock around’ on the tennis court there.  He had a heart condition that was causing some concern but he agreed to a short session and I thought that I would go kindly on him rather than be the cause of his demise.

I could tell from the outset that everything about his game exuded class – footwork, timing, and a fluid grace in his playing style.  We knocked up for a bit and then played a set.  I was annihilated.  As ever, I learnt a lot.

Like Colin, who tended to time rehearsals around important tv coverage of Wimbledon or a cricket test series,  DSQ’s Mary likes to keep abreast of how matches are going.  How she manages to remain focused in rehearsals with this going on is a marvel; how the rest of us do too is even more of a marvel.

Vicky enjoyed playing netball, hockey and tennis at school, and still loves games, particularly Scrabble with her family.  Lindsay’s preference over almost everything else in life is to be swimming in the icy cold water of a river or feeling at one with the sea.  We all have our particular forte, and the odd piano too. 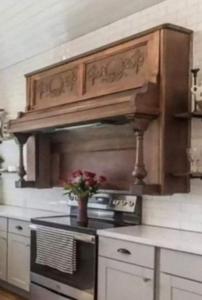 Next subject: The Sweet Spot – Sport and music part 2