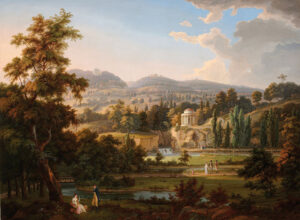 Haydn’s quartet op 76 no 4 (written c. 1798) is known as ‘The Sunrise’. Sunrise? It is not a nickname attached to the quartet by Haydn himself. It is very likely that the association arose because Haydn was writing his oratorio The Creation around the time that he was writing the quartet and some people saw a relationship between the opening of the quartet and the inspired depiction of sunrise near the beginning of the oratorio.

And yet…this quartet surely begins not tentatively like the first inkling of morning light but with a matter of fact held chord over which the first violin sets off on a dreamy, rising melody. Basically the chord acts as a pause, over which the violin extemporises. A pause at the beginning of a piece! What is going on? 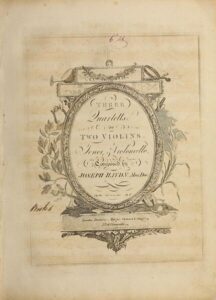 First edition of the Op 76 quartets

There are several pauses indicated by Haydn in Op 76 No 4 – nine in all, not including implied pauses like the opening chord. One in particular is most unusual: 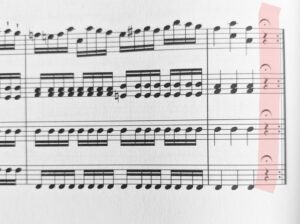 It is at the end of the first section of the first movement, before the usual repeat is indicated, implying a proper break in the flow of music – a settling before re-establishing that opening chord.  Sunrises don’t have pauses in my experience.  There’s surely much more going on.

Looking at the opening a little closer: after the placing of the first pause-chord, the first note that the 1st violin plays is dissonant and this dissonance happens each time similar pause-chords appear in the piece.

After the first section is repeated, the pause-chord appears again, firstly in minor mood

followed by another pause-chord (after three shorter chords) that surely must be one of the darkest Haydn ever conceived:

Amidst much that is vibrant and energetic in this first movement, these moments of reflection seem particularly telling. 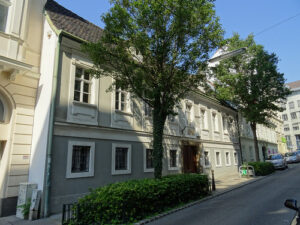 Haydn attended Viennese salons where Enlightenment intellectuals were present and he would have been very aware of the massive wind of change going on with the thinking around the Enlightenment and the march towards the ‘age of reason’.  He was a Roman Catholic man of faith.  It is said that he was very attached to his rosary and often felt inspired to compose once he had held it for a while and prayed.  (If this rosary still exists, it must be worth a lot!) The relationship between reason and religion would have exercised the mind of such a sensitive and thoughtful person.

The pauses in the music induce thoughtfulness in the listener. ‘To be, or not to be?’  Haydn takes us to a place of questioning, perhaps possibility, even doubt, and sometimes there is disintegration, like disappearing into an abyss. This happens in the last movement of this quartet where the first violin gets stuck, unable to find a way out, lonely, almost losing its personality:

Does his music simply stem from his thoughtful, imaginative character or does it reflect the revolutionary and enlightenment storms sweeping through Europe at the time, putting everything into question? I suspect that it is all of those things.  Today his music is as relevant as ever, drawing us in to the wonder of life and opening up existential questions that perhaps have no answers. 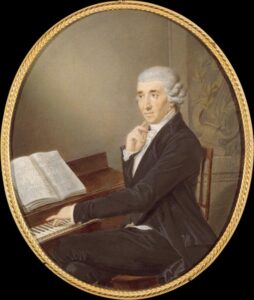