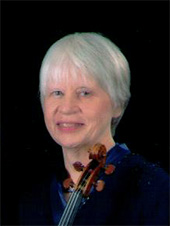 Mary Eade studied the violin with Yehudi Menuhin and Frederick Grinke at the Yehudi Menuhin School, during which time she participated in master classes by Nadia Boulanger, Kodaly and Ravi Shankar. Student life took her to Freiburg in Germany where she studied with Wolfgang Marschner, later returning to London and the Royal College of Music to study with Jose-luis Garcia.

As the violinist for the Divertimento Ensemble she has been involved in many concerts ranging from Piano Trios to Octets to Chamber Orchestral concerts and is much in demand both as a soloist and orchestral leader. Mary has been the Director of Taunton Sinfonietta since 2004 and is leader of the Ten Tors Orchestra. 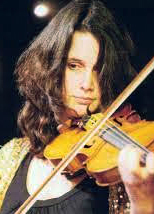 Lindsay studied the violin at the Royal Northern College of Music with Richard Deakin and Wen Zu Li and has worked since with many orchestras including the BBC Philharmonic Orchestra, the Royal Liverpool Philharmonic Orchestra, Welsh National Opera, English National Ballet, the Goldberg Ensemble and Manchester Camerata. Since her move to Devon Lindsay has become highly sought after in Devon for both orchestral and chamber music playing. She is a member of the Ten Tors Orchestra and The Divertimento Ensemble.

Sarah studied the violin and viola at Trinity College of Music where she won several prizes both as a soloist and as a chamber musician. She now freelances and travels all over the world playing chamber music. Sarah is much in demand as both an orchestral and chamber musician in the South West. She has been playing with the Rosewood Quartet for many years.

Born in the American Midwest, Lynn studied with Ray Still, first oboist of the Chicago Symphony. At the age of 21 she was offered the job of Principal Oboe of the Orquesta Filarmónica de la UNAM in Mexico City, where she also enjoyed frequent solo and chamber work. In 1977 she moved to Germany to study with Heinz Holliger. She has played in many German and Swiss orchestras, among them the West German Radio (WDR), Bonn, Bochum, Konstanz and Biel/Bienne orchestras. Lynn was soloist with the Heidelberg Chamber Orchestra, touring extensively for 18 months throughout Europe, North America and further afield. She settled in the South West in 1985 and now works with the Ten Tors Orchestra, Orchestra West, Somerset Opera, Taunton Sinfonietta, with whom she frequently performs as a soloist, as well as performing chamber music with Divertimento Ensemble and other groups. 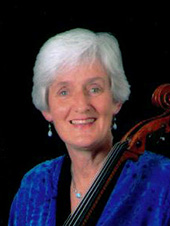 Vicky’s early cello studies were at the Royal College of Music Junior Department with Antonia Butler and later at The Central Tutorial School for Young Musicians in London (the predecessor of the Purcell School). She continued her musical training at Dartington College of Arts with Michael Evans, cellist of the Dartington String Quartet. He became her husband and she spent many years bringing up their five children before resuming a busy career as a freelance musician, manager of several chamber ensembles and orchestras, and director of Divertimento Entertainments.  Vicky is an experienced cello continuo player and has accompanied many fine singers including James Bowman, Neil Jenkins and Michael Chance. As a chamber music player, she has performed with pianists Margaret Lynn & John Bryden, flautist Judith Hall, clarinettist Colin Parr, bassoonist Martin Gatt, violinists Mary Eade & Malcolm Latchem.

Andrew’s  early studies were with Colin Sauer(violin) and Keith Lovell(viola) of the Dartington String Quartet. He went on to study viola at the Royal College of Music and the Hochschule für Musik in Frankfurt, Germany. He is the principal viola in the Ten Tors Orchestra and the Divertimento Ensemble. Highly in demand as a freelance chamber and orchestral musician his musical interests are diverse – baroque, contemporary and all things in between, – he is sometimes to be found at ceilidhs, playing the fiddle long into the night.

Judith Hall was brought up in Australia but began her career as Principal Flute with the Orchestra of the Royal Opera House, Covent Garden, and has since developed an international solo career.  She has performed in the major festivals in Britain, and toured France, Germany, Belgium, Holland, Italy, Scandinavia, Spain, Portugal, Greece, India and many parts of South East Asia. She has broadcast extensively for the BBC, and her CD’s have received the highest praise – one was for a time fifth in the list of Best-selling Classical CDs in Britain, as well as being chosen by the BBC for “Building a Library”. As well as broadcasting a large amount of the flute repertoire for the BBC, she has been featured artist on “Kaleidoscope”, Brian Kay’s Sunday Morning”, “Tuning Up” and ‘Woman’s Hour’. Judith also performs in a duo with guitarist Craig Ogden. 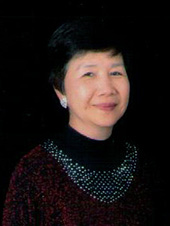 Margaret enjoys a wide-ranging musical career as performer, lecturer, music educator, radio broadcaster and music editor. As soloist, piano duo and chamber ensemble player, Margaret performs extensively in the UK, Hong Kong and Macau. She shares a long-standing partnership with renowned bassoonist Martin Gatt and together with oboist Jane Finch, has formed the Lynn Trio. Margaret’s recordings of music by Schumann, Brahms with Martin, and the chamber music of English composer Madeleine Dring have received critical acclaim. She has edited the works of Portuguese composer Aureo Castro, and has recorded all of his piano music. Margaret is also a specialist in aural training and has conducted many workshops for the Associated Board of the Royal Schools of Music and Radio-Television Hong Kong. She won a scholarship to the Royal College of Music in London, studying the piano under Kendall Taylor, Hubert Dawkes and Stephen Savage, and the harpsichord with Ruth Dyson. She also holds a Master of Music degree from the University of Surrey and a Doctor of Education degree from the University of Bristol. She was the Associate Dean and Director of Studies at the Hong Kong Academy for Performing Arts before taking up her present post as Academic Consultant.

Catherine studied the violin at The Royal Academy of Music. She is in great demand as a teacher and freelance performer with orchestral and chamber groups in the South West. She has appeared as a soloist with The English Mozart Players and The Ten Tors Orchestra. Catherine has been with the Rosewood Quartet for many years. 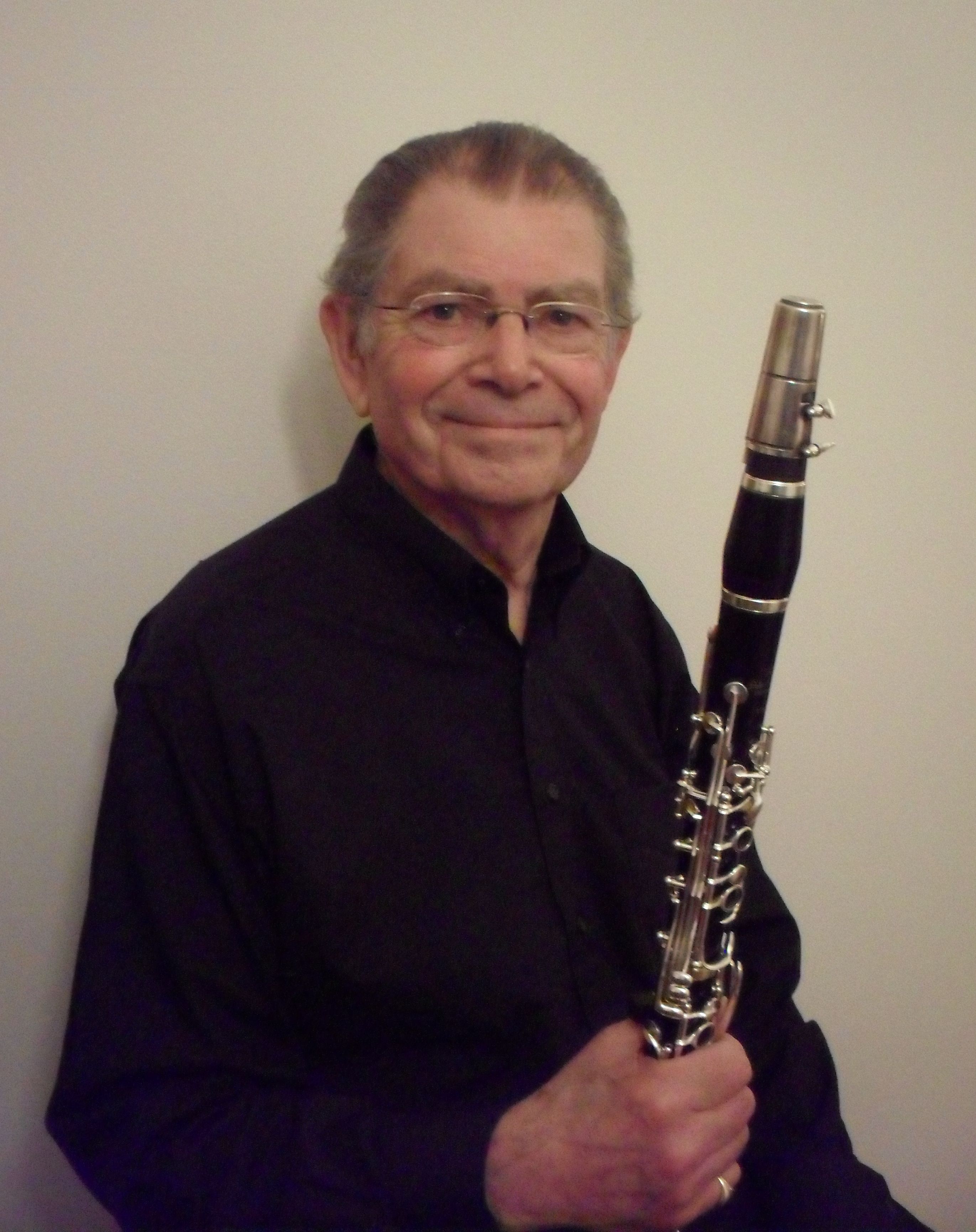 After six years in the Life Guards Band as part of his military service Colin became a clarinettist with the Royal Opera House Orchestra joining in 1963. In 1969 he was appointed principal clarinet with the City of Birmingham Symphony Orchestra.

Colin has appeared as soloist many times with the Orchestra playing concertos by Mozart, Weber, Nielsen, Debussy and most recently a piece for clarinet and jazz band by Morton Gould which was part of his farewell concert in Symphony Hall.  During his time in Birmingham Colin became a founder member of the Birmingham Contemporary Music Group and also appeared on occasions as guest principal with the LSO,LPO, RPO, and Philharmonia Orchestras. Colin retired from the CBSO in 2003 and now lives in the South Hams.