In the current situation that we find ourselves in, where life has largely been put on hold, apart from the valiant key workers who are tirelessly and admirably going about their work, it seems apt to consider the significance of rests and pauses, using music as a starting point.  I have touched on the subject of rests in music briefly before in a previous post but I have found myself recently reflecting more extensively on the subject in the light of our enforced break.

Firstly: isn’t lace wonderful! Here’s an example of Honiton lace that has a decidedly spring-like burst of life about it: 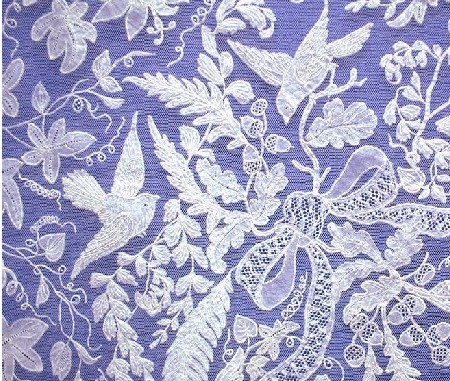 Lace provides a perfect illustration of the importance of rests in music.  The needlework represents the notes and the spaces between imply the rests.  They co-exist; without the spaces there would be no meaning. (I find that many of my pupils are rather baffled by this concept – that rests are so important and meaningful.  In their minds, music is about making sound.)

It’s often not clear to the listener what a profusion of rests exists in the music they are hearing.  Often, a player will have a rest when someone else is playing, so the rest is not so noticeable.  A good example of the importance of rests in music is the end of Haydn’s string quartet Op 33 No 2 (‘The Joke’), where his use of rests sets up the ‘punchline’ at the very end of the last movement.  We played this quartet in a concert series last year.  Hopefully some of you might remember the hilarity we all had.  You can listen to, and watch, the whole movement here:  https://www.youtube.com/watch?v=TiGVNpe_BhY

A very different use of rests is evident in the first movement of Schubert’s G major piano sonata D. 894.  https://www.youtube.com/watch?v=lj0J0LpeVGQ  The gap in the music created by the rests is a moment of thoughtfulness and calm.

I can’t resist directing you towards Schumann’s fabulous/surreal setting of Heine’s ‘Mein Wagen rollet langsam’.  https://www.youtube.com/watch?v=jQ42sPsFBuY  The rests here colour the text so aptly and get the imagination going in the listener’s mind.  And just listen to the piano coda!  Here is the text:

My carriage rolls slowly
Through cheerful green woodlands,
Through flowery valleys
Magically blooming in the sun.

I sit and muse and dream,
And think of my dear love;
Three shadowy forms nod at me
Through the carriage window.

They hop and pull faces,
So mocking yet so shy,
And whirl together like mist
And flit chuckling by.

(Translations by Richard Stokes, author of The Book of Lieder (Faber, 2005))

There are many other such examples of the use of rests in classical music.  Please do mention your own favourite examples, by commenting or emailing.

Pauses are a slightly different case but equally relevant to our musing at this time.  Again, please do post your own favourite pauses in music (of any sort).  One of the most powerful pauses I know is after the monumental build-up and cataclysmic crisis point in the last movement of Bruckner’s 9th symphony. You can find it in the section between 57:15 to 59:30 in this recording:  https://www.youtube.com/watch?v=MIJET6NO4-k&t=3565s  The pause (a silent pause in this case – some pauses are a note played extra long) gives time to reflect on the crisis point, rest, and move on to a calmer resolution as the work comes to its conclusion.

The four of us wish all our followers good health now and beyond this crisis.  We are very frustrated not to be able to perform our next programme to you but are looking forward to a resumption of play as soon as the covers come off, so to speak.  We hope to include the occasional musical offering via the Divertimento website, just so you are reassured that we still have a rough idea how to play our instruments and that there is hope on the horizon.

Let’s take up an idea suggested by one audience member and post or email anecdotes of unusual things that have happened in concerts/performances.  Do send them in and we will make sure they appear for all to see.  I’ll start the ball rolling:

I went to a Bournemouth Symphony Orchestra concert in Plymouth in the early 1970s at which Alan Loveday was supposed to be the violin soloist. When it came to that part of the programme somebody announced that he actually wasn’t going to be there because he had gone to Portsmouth instead of Plymouth. I think the orchestra had been on tenterhooks right up to that point.  I can’t remember what they actually played in the end!